Researchers led by the Royal College of Surgeons in Ireland and the Genealogical Society of Ireland have published the ‘Irish DNA Atlas; Revealing Fine-Scale Population Structure and History within Ireland’ in the journal Scientific Reports.
The landmark study provides the first fine-scale genetic map of the island of Ireland, revealing patterns of genetic similarity, so far in ten distinct clusters, roughly aligned with the ancient Provinces and major historical events including the invasions of the Norse Vikings and the Ulster Plantations. The Irish DNA Atlas project was co-designed by population geneticists at the RCSI and this Society coming together to collect DNA samples from 196 Irish individuals with four generations of ancestry linked to specific areas across the island of Ireland. Analyses of the DNA, and comparison with thousands of further samples from Britain and Europe, are revealing geographic clusters within Ireland: so far seven of ‘Gaelic’ Irish ancestry, and three of shared British-Irish ancestry.
According to Edmund Gilbert (RCSI), first author on the paper, “Our work informs on Irish history; we have demonstrated that the structure emerging from genetic similarity within Ireland, mirrors historical kingdoms of Ireland, and that Ireland acts as a sink of ‘Celtic’ ancestry. Additionally, we find evidence of a west-Norwegian-like ancestry that we believe is a signature of the Norse Vikings. We also observe the impact of historical events such as the Ulster Plantations on the DNA of the people of Ireland.”

Prof. Gianpiero Cavalleri (RCSI), who directed the research, stated “for our study design to work, it was vital for us to collaborate with the Genealogical Society of Ireland. They helped us reach the very specific cohort of people needed: people who could demonstrate that all 8 of their great-grandparents had been born within 50km of each other. This has allowed us to create a genetic map for the Irish population, with resolution similar to that recently  drawn for England. Whilst we are delighted by what the study to date has revealed, this is a live study; the more people who participate the greater resolution we can achieve.”

The collaboration between RCSI scientists, their international network of experts, and a national voluntary organisation, provides an exciting example of how citizens can contribute to important scientific discoveries. The Irish DNA Atlas is an ongoing study. If you are interested in participating, please contact Séamus O’Reilly FGSI, who directed the collection and collation of all of the genealogical data for this project. Email: irish.dna@familyhistory.ie 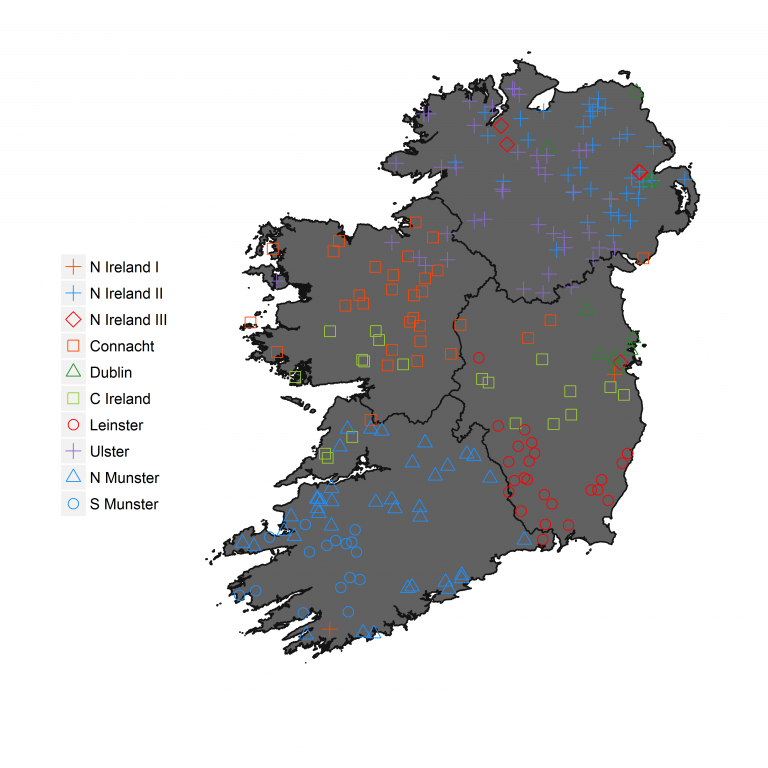 The Irish DNA Atlas Project is an exciting and very important collaborative research project undertaken by the Genealogical Society of Ireland and Dr. Gianpiero Cavalleri of the Royal College of Surgeons in Ireland.
The Project was launched at the ‘Back To Our Past’ exhibition in the RDS, Dublin, in October 2011 and received considerable coverage in the media. The main objectives of the project are to (1) to further our knowledge of the population history of Ireland and (2) to help us understand how genes influence health in Ireland.
Participants are sought from across the island of Ireland and, indeed, from overseas who can trace each of their eight great-grandparents to the same general area of Ireland to present a Birth Brief (Pedigree Chart) and to provide a DNA sample (kit provided) for analysis. The Society continues to seek volunteers but we are unable to respond to each request immediately as the GSI is a voluntary body with limited resources. We will hold all requests and respond at a later stage.

In August 2013, the Project Team welcomed Dr. Darren McGettigan as the Historical Director of the Project. Dr. McGettigan brings a wealth of experience in researching early and medieval Irish history to the analysis of the surnames and the interpretation of the data in relation to historical events and the known population movements and settlements in Ireland.