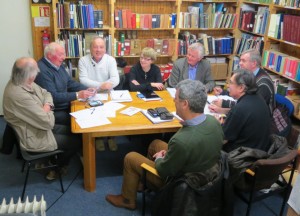 Board of Directors – Genealogical Society of Ireland

The Board of Directors of the Genealogical Society of Ireland is elected annually by the Members at the Annual General Meeting held on the second Tuesday in March each year. The below were elected at the AGM held in March 2016.

Board meetings are normally held on the first Thursday each month at the Daonchartlann. Picture opposite shows a typical meeting in progress.

Nota bene:  The above were elected at the AGM in March  2016 and received their portfolios at the April meeting of the Board.